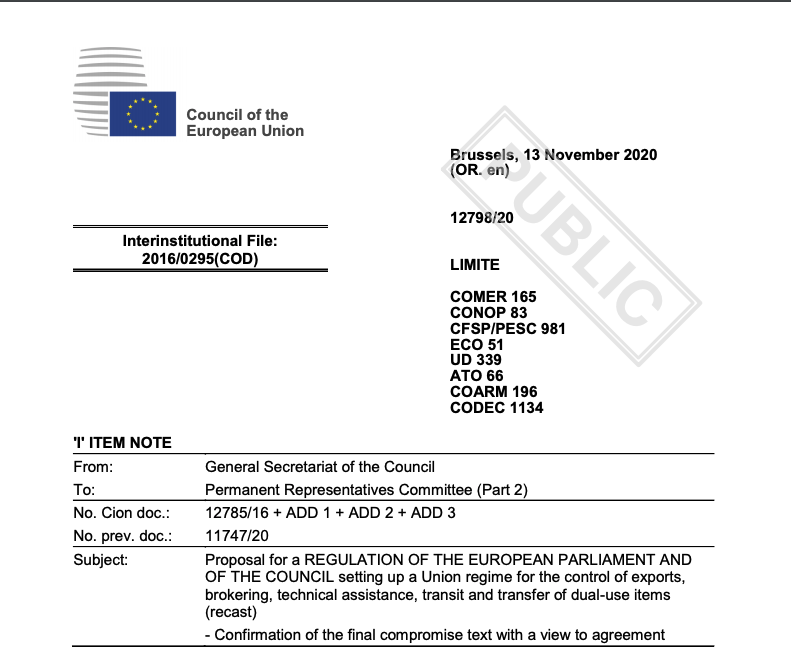 On 18 November 2020, the Council published an informal version of the final compromise text of the new EU Export Control Regulation (Recast of the Dual-Use Regulation 428/2009).
The way to the modernisation of EU export controls was a long process. Since the publication of the Green paper in 2011 (COM(2011) 393 final), almost ten years passed. In September 2016, the Commission transmitted its legislative proposal (COM(2016) 616 final) to the European parliament and the Council, which adopted their positions in January 2018 (TA/2018/6/P8) and June 2019 (ST 9923 2019 INIT), respectively.
Between October 2019 and November 2020, five informal trilogues took place. A compromise was reached during the final trilogue on 9 November, 2020.
Council’s position presents substantial differences with regard to the RECAST as proposed by the Commission and as successively amended by the European Parliament. The adoption and publication of the final joint text is scheduled in May 2021 and its entry into force ninety days later.

The main changes characterising the final compromise text are the following:

A more detailed view of the major updates is available in the attached document.