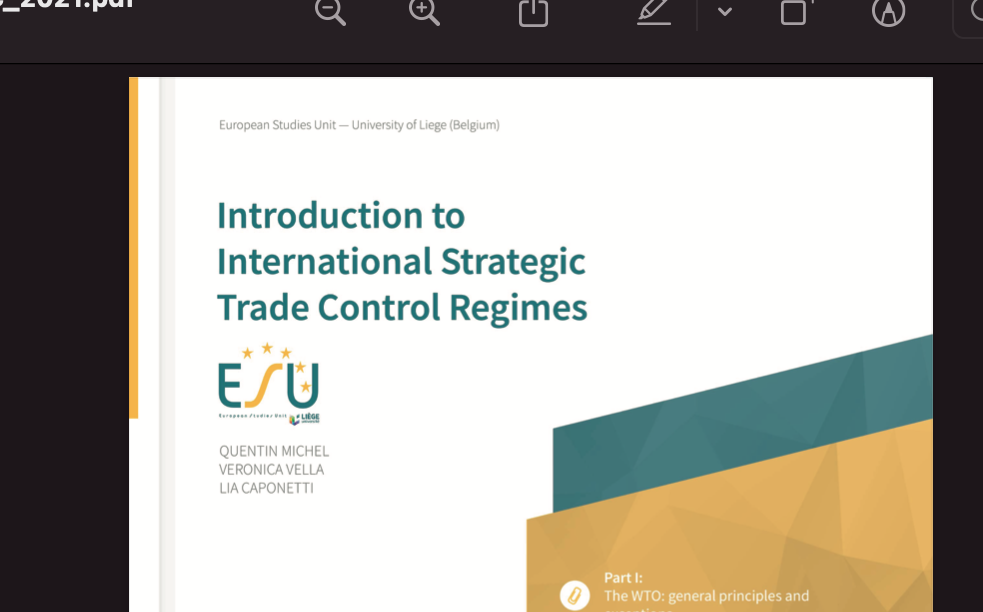 The European Studies Unit (ESU) of the University of Liège is delighted to announce the publication of the revised and updated handbook “Introduction to International Strategic Trade Control regimes” edition 2021.

The work, first published in 2017, has been entirely revised – both in the content and in the layout – , updated and completed with new and relevant information.

The book aims at introducing to International Strategic Trade Controls Regimes, or what traditionally has been known as export control regimes.

It consists of three parts. Starting from the underlying rationale of strategic trade controls regimes and systems, the first part of this work outlines the overall structure and general principles of the World Trade Organisation (WTO), which provides for exceptions in international trade. In particular, the possibility of derogations to the general principle of free trade is introduced with a special focus on security exceptions (Art. XXI GATT).

The second part explores free trade exceptions organised by other international legally and politically binding instruments. In other words, international treaties, regimes and systems are investigated. This inquiry is conducted in light of the categorization of items. The specific categories of items that are covered by the text are: conventional weapons; dual use items related to weapons of mass destruction and their means of delivery (WMD-including nuclear, chemical and biological weapons); conflict minerals; diamonds and cultural goods.

The third and last part investigates regional rules and policies. Specifically, the legally and politically binding acts of the European Union are analysed. As it is the only example of an international organisation that has the competence to rule trade at the regional level by adopting legally binding acts for its Member States, this part explores basic principles of EU Common Commercial Policy (CCP) and its trade exceptions.

Strategic trade control is an ever ongoing-process, dealing with the ever-advancing human genius capable of maliciously misusing almost every single thing for economic and other reasons. Therefore, the equilibrium between security and economic interests is always difficult to maintain. And dealing with the human genius, the mentioned equilibrium may be easily disrupted, for example, by the advancement of technology. New developments, as cyber weapons or artificial intelligence, have opening new paths.

On the whole, this book intends to provide the elements necessary to understand what strategic trade control is.